For van Roje, a German sawmill and pellet producer, being less conventional is a way of striking a balance between technical, logistical, environmental and economical efficiency. So it makes perfect sense that they should use off-spec fuel and install a novel flue gas condenser. 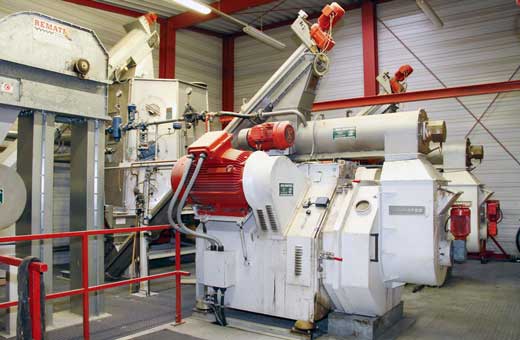 Two Salmatec presses are at the heart of the van Roje 45 000 tonne per annum pellet plant. 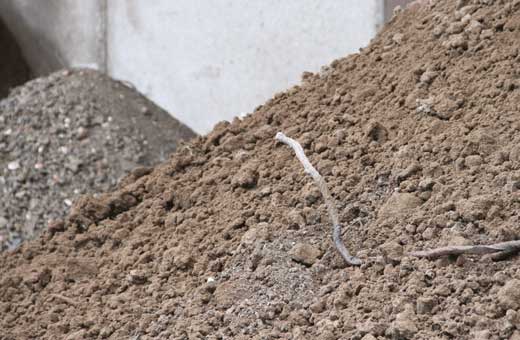 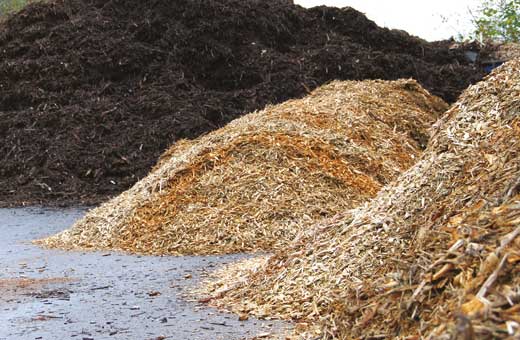 Set in the rolling foothills of the Rhine-Westerwald National Park, about 30 km northeast from the city of Koblenz, is Oberhonnefeld-Gierend where I. van Roje & Sohn Sägewerk und Holzhandlung GmbH & Co. KG is located.

As the name suggests van Roje is a familyowned firm founded in 1929 as a small sawmill producing pit-props for the mining industry.
In 1996 the current sawmill at the 24 ha Oberhonnefeld site was built consolidating operations that had been carried out across several sites previously.
Today the company processes over 500 000 m3 of roundwood per annum.

The species mix is 85 percent spruce (Picea abies) 15 percent Douglas fir (Pseudotsuga menziesii) and sourced within about 100 km radius from the surrounding hinterland.
Almost all the logs are supplied to the mill as tree length and on arrival to the log-yard, a gantry crane operator sorts the logs according to length and grade.
The logs are also scanned for metal as shrapnel from World War II can still be found.
All production is strictly to order and van Roje offers about 5 000 different dimensions, right up to 350 x 350 mm and 14 m in length.
Two dry-kilns have a combined capacity to dry 120 000 m3 per year, about half the annual production, the remainder is supplied to clients unseasoned.
On average 70–80 percent of production is exported.

The company consistently with trying to make best economic use of the logs including each residue stream.
In 2007 the company set up Energiepellets Oberhonnefeld investing 6 million EUR into building a 45 000 tonne per year pellet plant next to the sawmill to use the sawdust.
“We produce 6 mm pellets and are DIN plus certified.
We do bulk only and have limited on site storage which is now full so we would like the heating season to get going,” said Gerhard Hauschulte, production manager at van Roje during a round tour of the facilities.
In the meantime the company is busy installing a new hammermill for grinding woodchips as there is not enough sawdust.

In 2008 a new 8 MW biomass fired heating plant was commissioned to supply heat for the sawmill and pellet facility.
Although the moving grate boiler was originally designed to use waste wood and bark, van Roje purposely use off-specification fuel.
Their bark is sold for gardening and landscaping purposes.
“We buy in shredded green wood waste instead of using our own residues as it is 50 percent cheaper than what we get for our bark and woodchips,” explained Stuart Lloyd, responsible for the boiler house operations.
The boiler uses about 40 000 tonnes of fuel a year.
Being freshly cut, green waste typically contains a percentage of leaves which increases the chlorine content.
As the boiler was not designed for such fuel, maintenance and replacement costs are significant.
“Although we may spend 100 to 200 000 EUR on boiler maintenance annually it still makes around 1/2 million EUR difference to use green waste as fuel.
And it keeps me busy,“ said Lloyd.

Apart from saving on fuel costs the company also keeps a look at energy efficiency measures.
This in order to safeguard future energy requirements avoiding, for instance, a situation whereby pellet production becomes hampered because heat is a limiting factor.
At the end of 2012 van Roje removed the original heat recovery unit in the boiler house as it too suffered from the use of off-spec fuel.
It was replaced by a new flue gas condensation unit from a Swiss company, IS SaveEnergy AG, a company specialised in developing, distributing and maintaining robust solutions for economical and enviromentally efficient flue gas cleaning and heat recovery systems.
This novel unit recovers the heat from the hot and moist flue gases while at the same time it brings down the emissions of particulate matter.
The recovered low-temperature heat is fed into a Swiss combi belt-dryer to dry the sawdust down to 10 percent moisture content at the pellet plant.
“Another pay-off from using such wet fuel is that this flue gas condenser unit extracts the low-grade heat we want for the belt-dryer and removes particles.
Furthermore its own power consumption is scalable.
The unit boosts the efficiency of the entire boiler house by over 25 percent,” said Lloyd.
The output of the flue gas condenser is limited by the quality of the fuel but according to Adam Sitka, business development manager, SaveEnergy, can “reach over 50 percent of the recovery of a given boiler capacity.”

The pH level of the condensate is neutralised and cleaned from the solids by a water treatment system also supplied by SaveEnergy.
Only the cleaned condensate excess is discharged into the recipient system so the condenser does not require any fresh water.
With the intensive injection of process water into the flue gas, the flue gas condenser doubles as a flue gas scrubber.
Here, coarse dust particles in the flue gas are bound to the surface of the liquid by the inertial forces and then transported into the water treatment system via the process water.
The condensate is cleaned in a two-stage process.
In the first stage condensate is passed through a lamella separator.
Gravity causes the majority of the solids to be deposited before stage two in which the pre-cleaned condensate seeps through a sand filter to remove the remain ing solids.
The sand filter is cleaned automatically, the cleaned condensate is collected in the clean water tank with excess discharged to the recipient system.
“In short the SaveEnergy unit is really a compact, robust and clever piece of self-contained kit.
It came modular on a skid and we lowered into place through the roof.
Connection and set-up was almost plug’n’play as it was pre-designed to our circumstances,” concluded Lloyd. 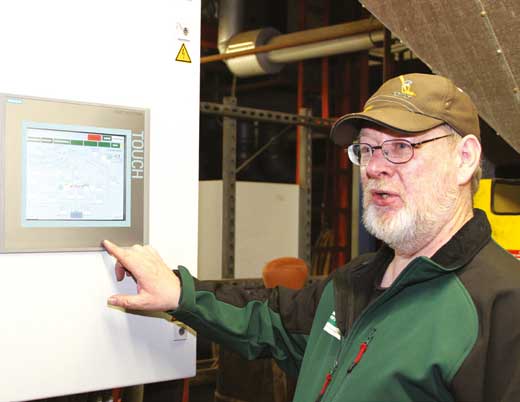 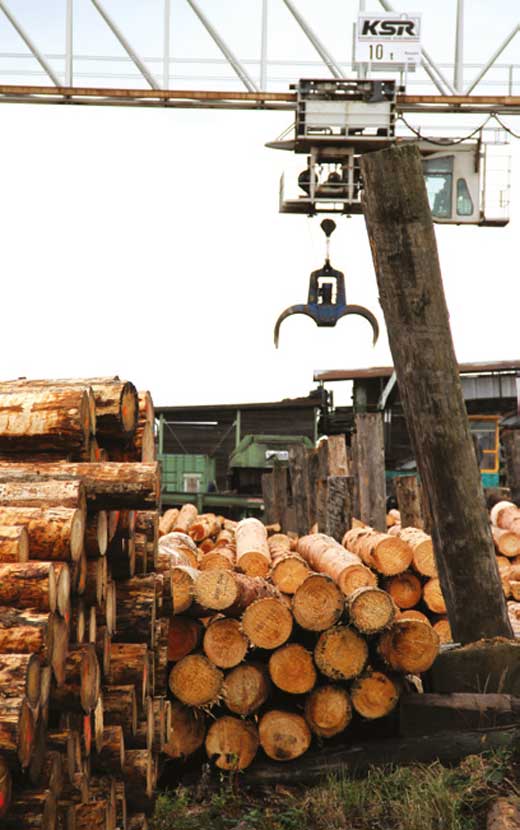 A head for heights and keen eye for quality, key job at van Roje. 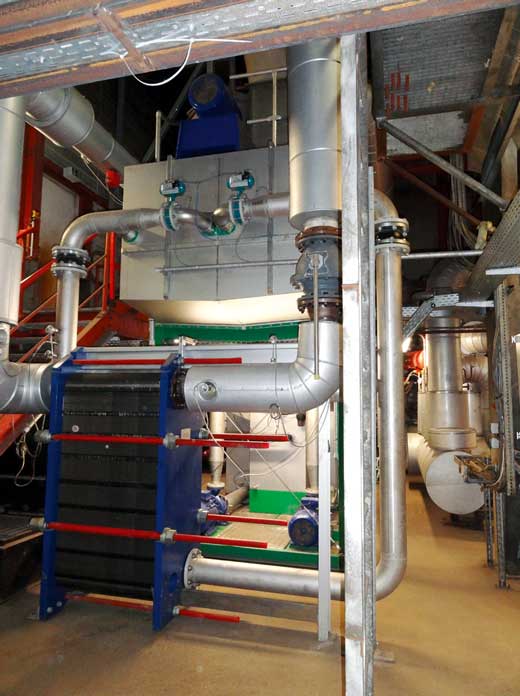 A view of the skid mounted SaveEnergy flue gas condenser unit from the front (Photo SaveEnergy). 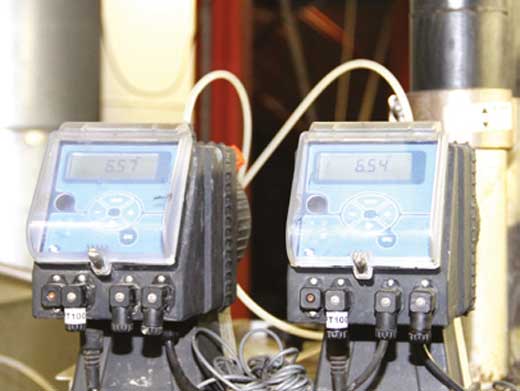 Monitoring the pH of the process water..